For more than a century, Stone Academy has provided students with a career-orientated business education through both classroom and hands-on instruction.

Since being founded in 1864 as the United States College of Business and Finance, students have received job training for the most in demand careers of their time through courses that are designed to be relevant and accelerated during day or evening sessions. Originally located on the ground floor under the music hall of the Bunnell Opera House at 96 Crown Street in New Haven, Connecticut, the college opened its doors to three hundred students on September 2, 1864. 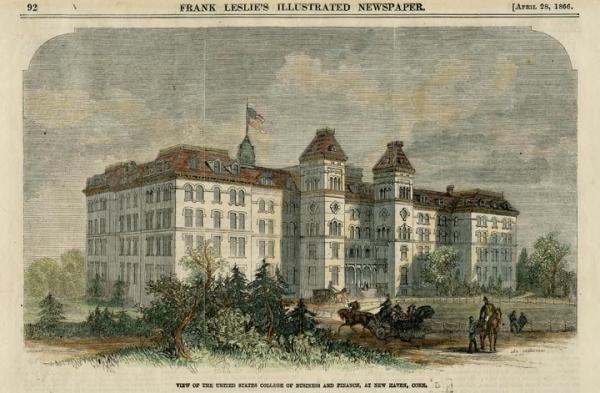 United States College of Business and Finance was located on the bottom floor of the Bunnell Opera House on 96 Crown Street, New Haven

Both of the schools founders, Charles R. Wells and Thomas H. Stevens were both former professors at the Eastman Business College in Poughkeepsie, NY. Stevens believed that the skills of business could be applied to everyone, “to the farmer, the mechanic, the manufacture, the lawyer, the merchant, and the banker,” placing emphasis on the importance of accounting stating that the knowledge of the subject is “always an invaluable assistant- a sentential guarding each and all against embarrassment and insolvency”. Offering courses in commercial law, geography, political economy, science of government, biography of American History, arithmetic, English, and spelling, instructors were able to prepare young men who were just being disbanded from their military companies after the Civil War for careers in business. Disabled soldiers and war veterans returning home from the Civil War were charged half tuition to the school, as well as offered a hand in preference of employment following graduation. Job placement would be given to those who had “bared the scars of war”, according to Wells. Graduates from the college could go on to work in the fields of banks, custom house, insurance, railroad, steamboat and express officers, post office, telegraph office, and exchange and collection office.

Stevens passed away in 1872, leaving Wells to re-organize the college. In the following year, 1873, the college changed its name to the National College of Business, and moved its location to Chapel Street in New Haven. In 1876, following his official discharge from the Civil War, R.C. Loveridge acquired the National Business College. Loveridge had previously engaged in civil engagement, was a veteran, and a former politician. In 1878 he renamed the college to the Yale Business College, with no connection to Yale University. Loveridge is listed as the President of the college for years to follow as well as a respected professor.

Around the year 1900, a student at the college by the name of Nathan B. Stone came in contact with Loveridge. Graduating in the year 1901, Stone became officially associated with the Yale Business College and in 1908; Stone purchased the school and became president of the college. 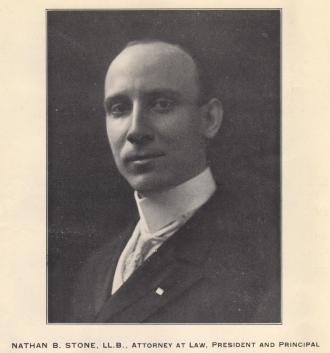 Stone was the head of the Connecticut Business Educators Association, and went on to receive his law degree from Yale University. Passionate about his school, he believed firmly in the importance of providing business education, and is quoted as saying; “training of young people for business is one of the most inspiring professions under the canopy of heaven”. Stone organized a school of accounting within the college as well as the framework for founding a school of law within the college. In 1916, Yale Business College officially became known as Stone College, taking name after Nathan Stone, as a result of his dedication to the school and community, and moved its location to 116 Church St in New Haven, Connecticut.

Growing in size and popularity, in 1936 Stone College moved its location to 136 Temple Street in New Haven. The new central location of the main school building was highly praised by the community; parents of students loved the central location and the new immaculate and modern design of the classrooms and noted “noise from the street is silenced out”.

Following the passing of his father Nathan Stone in 1951, Littell Stone became president of Stone College. Success of both the college and the graduates are in the facts and figures of graduation and enrollment rates for the next couple decades. For example, by 1953, not only did Stone College boast proudly 35,000 alum, it also began to offer courses outside of the business concentration, and began to offer courses in the field of medical secretarial.

In 1970, Stone College was purchased by Bradford School Cooperation of Pittsburgh (a subsidiary of the Life Insurance Co of Virginia). Bradford owned and operated eight other business schools and junior colleges at the time through the United States. The Bradford Corporation planned to add new courses to the present curriculum as well as introduce new business equipment. The move also allowed for expansion and growth in enrollment, and as a result of this, Stone College was relocated to Dixwell Ave, in Hamden CT.

In 1988, as a result of a merger with The Academy of Business Careers, Stone College officially became Stone Academy. The Academy was a vocational school that taught practical business instruction. The merging of the two similar schools resulted in a more competitive and more profitable program. Stone Academy became the third largest school of its kind in the state. The 1990’s brought a high demand for allied healthcare professions, and staying true to its original purpose of providing in demand career training for its graduates, Stone began offering courses tailored to the healthcare field. A merge with Goodwin College in 2002 allowed for Stone Academy to expand its educational ready in branch campuses in Waterbury and East Hartford.

Today, students at Stone Academy have the opportunity to take both day and evening classes at Stone Academy’s main campus, which is located in our newest facility located at 560 Sawmill Road in West Haven, Connecticut. Two branch campuses also expand reach to our students making taking classes at Stone more accessible. The Waterbury campus located on Pierpont Road was established in 2002 after it was acquired from the Goodwin Institute, a branch location of Goodwin College. The East Hartford branch campus is located at 745 Burnside Avenue in East Hartford, Connecticut. Established after an acquirement from Goodwin College in 2005, Stone Academy at East Hartford only offered LPN nursing programs. Today, we are proud to be offering our Practical Nursing program in East Hartford for both day and evening classes along with Medical Assisting and Patient Care Associate.

Students at all three of Stone Academy’s locations are provided with hands on instruction from a dedicated staff and graduate with the skills and tools that leave them prepared for their career in the ever-growing allied healthcare field. The college continues to model after the original design of accelerated programs and the success rates of the graduates can be proven in career placement facts dating back to 1864. 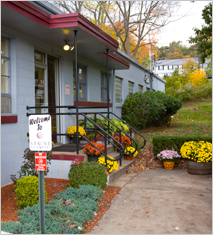 For Current Stone Academy Students
Coursework for current students is being offered online. Read more about our online coursework here.